JUNE 12, 2020 – Laurence D. Popowich, DDS, has announced his retirement from Valley Oral Surgery, the medical practice he helped co-found in 1984 with Mark H. Grim, DMD, who retired in 2017.

“A good friend of mine said you’ll know when the time has come to retire. Well, I now know that time is right for me. I’ve been blessed to not only help so many patients over the years, but also to work with such an incredible team of medical professionals all these years,” Dr. Popowich said.

“I’ve been very fortunate to practice in a profession that I loved. Experiencing the great developments in oral surgery during my career was extremely rewarding. The advent of dental implants was truly life changing for our patients. I was very lucky to be one of the first surgeons in the United States to be trained in dental implants. I was able to help many patients over the years.”

As for his future plans, Dr. Popowich said, “I plan to spend my time gardening, golfing, enjoying my grandson, William, and simply finding some time to do nothing at all. I plan to continue to reside with my wife, Pat, in the Lehigh Valley.” 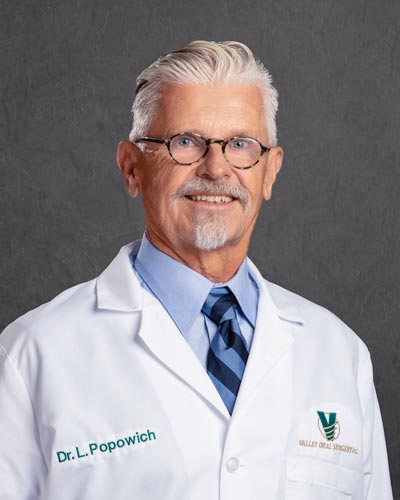 Dr. Popowich grew up in southern Ontario, completing his undergraduate degree from the University of Western Ontario in London, Ontario in 1973. He then attended the University of Western Ontario Dental School obtaining his Doctorate Degree in 1977. Dr. Popowich then went on to do a post-graduate dental residency program at University Hospital in London, Ontario from 1977 to 1978. Dr. Popowich received his certificate in oral and maxillofacial surgery after successfully completing his surgical residency program at the University of Pennsylvania in 1981. He became Board Certified, receiving Diplomate status in Oral and Maxillofacial Surgery in 1986. Dr. Popowich went on to hold a teaching position in conjunction with The University of Pennsylvania, at Geisinger Medical Center in Danville, Pennsylvania from 1981 to 1982. Since 1982, Dr. Popowich has maintained a full time private practice in the Lehigh Valley. In 1984, he and Dr. Grim merged their solo practices to establish Valley Oral Surgery, P.C.

Dr. Popowich practices the full scope of oral and maxillofacial surgery, and his special area of interest is major reconstructive maxillofacial surgery; emphasizing comprehensive implant rehabilitation, bone grafting procedures for implant placement, and soft tissue procedures associated with implant dentistry. Dr. Popowich was one of the original group of oral and maxillofacial surgeons in the United States to be trained to surgically place implants. The training was provided by Dr. P.I. Branemark and his team, the innovator of dental implants worldwide. Dr. Popowich has received one on one mentoring from Dr. Branemark and maintains his relationship with Dr. Branemark through an international study group based in Spokane, Washington.

Dr. Popowich has published numerous articles in his specialty and has also performed research in the field of temporomandibular joint disorders. Dr. Popowich continues to keep abreast of the latest technology and procedures by attending national meetings for continuing education, as well as being a cofounder of a local continuing education forum called The Valley Institute for Advanced Dental Education.

Besides oral and maxillofacial surgery, his passions are his family, gardening, and the ever-challenging game of golf.